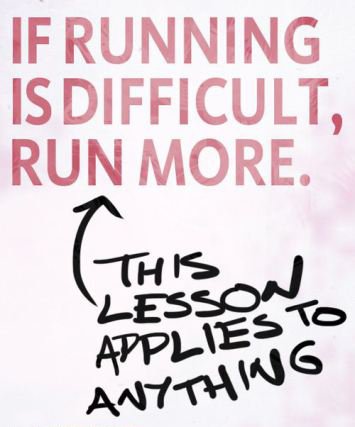 It seems counter-intuitive, but it’s true: “If running is difficult, run more.”

You know, that thing that makes your legs scream for mercy, pores spew sweat, and lungs strain for air? Yeah, do more of that.

Sounds crazy, right? Well, the thing is, the more you run, the better you get at it. It feels difficult at first – if not impossible – but the more you do it, the easier it becomes, and the more you can accomplish.

I’ve been running since I was really young. We lived in the country and it was a way for me to explore. Not only my surroundings, but also my capabilities. I was always so proud to come home and tell my parents how far I went on a run.

I eventually ran track and cross country through middle and high school. Then in college, I ran my first marathon. It was somewhat of an accident how it happened though, and it wasn’t pretty, but I did it.

It all started when three friends and I decided to run a marathon relay. The race was broken up into four parts where each runner did about six miles each, and I was assigned to the first leg of the race.

I trained a little harder for it than I should have because I didn’t want to run too slow and disappoint my teammates. So, come race day, I was interested to see how far I could run. I decided I’d just keep running until I couldn’t run any more and then I’d walk the rest of the course.

BANG! The race began, adrenaline was high, and I focused on running those first six miles hard for my teammates! Before I knew it, my six miles were up and I had tagged my friend to start her leg. I kept running as planned and figured it wouldn’t be long before I puttered out. All the sudden, I was passing mile marker 13 and was already halfway through the marathon!

I couldn’t believe I had just run a half marathon. At this point, I was definitely feeling the pain, but I figured if I had run half, I could run the other half (made sense at the time). At mile marker 20, with six miles left in the course, I was feeling really rough, but I told myself this was the final leg and I was on the home stretch.

Four and a half hours after starting what began as just a six mile race, I was beginning mile 26. My body felt like it was stuck in quick sand and everything hurt, but everyone was cheering for the runners and I couldn’t stop on the last mile! I remember being in tears – happy, so incredibly proud of me tears – as I crossed the finish line, frantically looking for a place to collapse and rest.

And rest I did. I couldn’t walk for the next few days, I lost both of my big toe nails, and endured lots of other unmentionables. But I couldn’t have been happier.

I ran two more marathons (actually training for them) and lots of other 5Ks and 15Ks in the years that followed. I liked the structure that training gave me; it gave me a goal to work toward, rather than just working out.

When we began infertility treatments, my doctor told me to stop any strenuous activity and relax. He didn’t have to tell me twice. I completely stopped running that day, and for the past two years, I didn’t do anything more than a brisk walk. Even that was on a rare day because I was scared of a high heart rate jeopardizing my treatment results or the pregnancy once I did get pregnant.

About a month after you were born, I remember trying to run down our driveway to get the mail because it was raining, and I was completely shocked with how bizarre it felt. Not only was I winded by the time I reached the end of our drive, but I felt like someone had rearranged all the muscles in my body and it just didn’t work the same any more. Something that had become so second nature to me was now so foreign and unpleasant.

I wondered if I’d ever be able to run again. It was such a big part of my life before, and it made me sad to see it slipping away. So, I decided to do something about it. I got a workout DVD and had to start on Level 1 doing the modified versions. I was mortified that I – a former marathon runner – was that weak, but I knew I had to start somewhere. Eventually, I was able to do Level 1 without the modifications, and move up to Level 2, then 3.

We joined a gym a couple months ago, and I started walking an incline with a short run at the end. I did five minutes at first, and eventually got up to doing a 10 minute run at the end of a walk. Then yesterday happened.

It was a gorgeous, blue sky, crisp air, Spring-like day. As I sipped my coffee looking out the window, I thought “Today would be a great day for a run.” It’s a thought I’ve had often over the past two years, but always put it back on the shelf because I wasn’t allowed to run. But yesterday I didn’t shelve it. I decided to do what I did many years ago and just run. See how far I could go. Surprise myself.

So, I put on my running shoes and headed out that door figuring I’d get winded after a few minutes. But I didn’t. I passed the spot where I usually walked to. Then, I passed the spot I had gone on my longest walk to last year. I saw a road in the distance and thought “See if you can go that far.” And then I did. I couldn’t believe it.

Once I reached my goal destination, I turned around and headed home, unsure if I’d be able to continue running the whole way back. But I figured I’d try – I had run the first half, why not the second, right? After running non-stop the entire time, going about three miles total, I ran down our driveway cheering “I did it! I did it! I did it!” All the way into the house – I couldn’t wait to tell Pete.

He’s been “running” is own race lately – making similar progress – in his battle with RA, and all his arthritis-related surgeries. While recovery hurts, he just keeps at it, and it hurts a little less the next time because he’s stronger. He’s now able to do things he hasn’t been able to do in months, and he’s slowly but surely getting his mobility back.

So, keep that in mind, no matter what your race is, or where you’re headed: “If running is difficult, run more.” You might just surprise yourself.