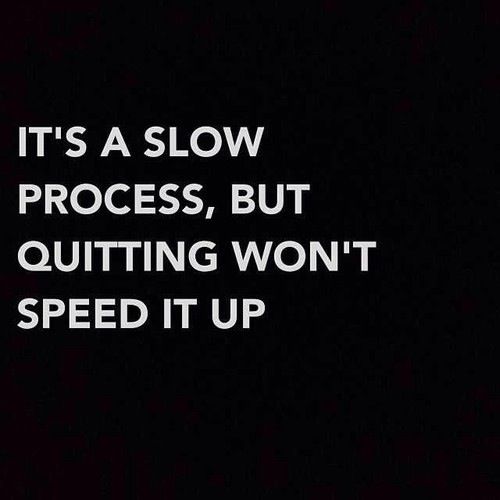 Today is a big day. After having double knee replacements 10 weeks ago, your daddy returned to work today.

Watching him walk down the hall this morning — standing tall, hair slicked back and dressed to the nines in a dapper suit — my heart swelled with pride. Just a few months ago, that same man walked (if you could call it that) wincing in pain with each step, after hours (yes, hours) of he and I both working to get him ready for the day.

The difference was drastic this morning since it was his first day back, and I can easily contrast it with that arduous last day 10 weeks ago. But it was the in between that was difficult. It was difficult because Pete had to work SO hard, and so consistently, for the slow and steady progress.

We live in an instant gratification world where anything you want is at your fingertips. So quickly. So easily. Satisfaction guaranteed. But some things in life (especially recovery) aren’t like that.

There are mornings where moving is the last thing you want to do, but you have to because scar tissue will form — forever limiting your use. Then, when you do move, you can only bend a couple degrees (if any) more than the last time they checked, and it feels like a whole lotta work for nothing. Haven’t I been through enough? Haven’t I hurt enough? Haven’t I worked hard enough?

The answer is no. There have been million times where Pete and I both wanted to say “ENOUGH ALREADY!” when it comes to battling this horrible RA. Then we realized — It’s a slow process, but quitting won’t speed it up.

We want to be fun, active parents. We want to show you the world together. And this recovery — albeit painfully slow — is the only way to get there.

So we’ve been celebrating the small victories, like being able to bend his knees two degrees more than yesterday… being able to shower again…. going out to eat as a family again… walking without a cane or crutches… and today, going to work again. These are all simple things most people take for granted every day, but they’re big accomplishments for Pete.